Astaxanthin – Arthritis, Cancer and much more

Astaxanthin is a carotenoid, a chemical found naturally in certain plants and animals. A type of algae makes astaxanthin. This algae is used as a source for the astaxanthin in supplements. 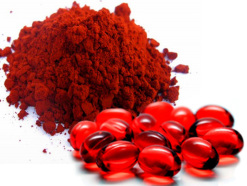 Why do people take astaxanthin?

Astaxanthin is an antioxidant. That means it helps reduce a natural process in your body called oxidation. This process may play a role in many diseases and changes such as:

Astaxanthin can also reduce inflammation. It might be useful as a treatment for problems that involve inflammation, such as:

Laboratory research has found that an extract from algae that makes astaxanthin slowed the growth of breast and skin cancer cells.

Astaxanthin might help the heart in a number of ways, as well. It may be helpful in preventing plaque buildup in arteries in the heart.

It may also help protect heart muscle from damage from lack of oxygen. This can happen during a heart attack.

Also, by reducing oxidation in the brain, it may protect against Alzheimer’s and Parkinson’s diseases.

Astaxanthin may reduce the growth of H. pylori bacteria, which cause peptic ulcers. It may also help protect against kidney damage from diabetes. And it may stimulate the immune system.

However, more research is needed before astaxanthin can be recommended for any of these uses.

Supplement makers may suggest varying amounts of astaxanthin for different purposes. Most of the small research studies to date have used between 2 mg and 24 mg daily. However, optimal doses of astaxanthin have not been set for any condition. Quality and active ingredients in supplements may vary widely. This makes it difficult to set a standard dose.

Can you get astaxanthin naturally from foods?

One of the largest sources of astaxanthin is in certain types of marine algae.

Astaxanthin is also found in several types of seafood, including:

Four ounces of sockeye salmon contains about 4.5 milligrams of astaxanthin.

What are the risks of taking astaxanthin?

Side effects. Some laboratory studies have shown astaxanthin may hinder an enzyme called 5-alpha-reductase. As a result, it could keep testosterone from changing into the hormone DHT in the body. It’s unclear what effect this may have, but prescription medicines that affect the same enzyme may cause side effects, such as:

Astaxanthin may increase your immune function, so use caution when taking it if you:

Also be cautious using astaxanthin if you have:

Interactions:  Use with caution if you are taking a drug that affects hormones, such as a 5-alpha-reductase inhibitor, or if you are on a drug for high blood pressure.

Tell your doctor/GP about any supplements you’re taking, even if they’re natural. That way, your doctor can check on any potential side effects or interactions with any medications.

If you have any other question please leave me a comment below.

Just a quick note: Everything in excess or badly dosed can harm you or your family. This is merely to inform you and give you a bit of knowledge, is not in any way a “thumbs up” to take anything. I am writing this post as informative.

How to Up Your Comfort Levels When Travelling

How to Cope with the Loss of a Loved One

Previously on My Life