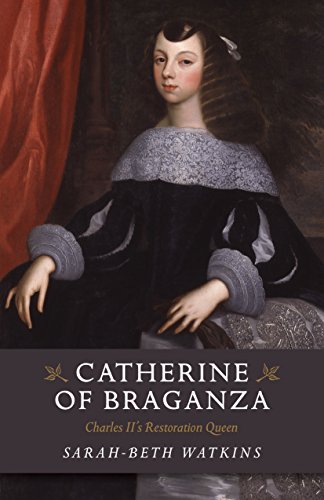 Catherine of Braganza by Sarah-Beth Watkins

Yet life for her was not so merry – she put up with the king’s many mistresses and continuous plots to remove her from the throne.

She lived through times of war, plague and fire. Catherine’s marriage saw many trials and tribulations including her inability to produce an heir. Yet Charles supported his queen throughout the Restoration, remaining devoted to her no matter what.

Outliving her husband, she ended up back in her home country and spent her final days as queen-regent of Portugal.

I studied Catherine’s (Catarina in Portuguese) life for some time and this author is brilliant. Loved this book deeply since it speaks of what I know.

Fun fact: Did you know that British drink Tea at 5pm because of Queen Catherine? She was the one that introduced this habit in the Royal Court since Portuguese were the ones with trade route to China.

Tea in China and in Portugal is called the same: Chá, and are the only countries in the world saying the word in the same pronunciation.

Sarah-Beth Watkins is a best-selling leading author in historical fiction.  Her history works are Ireland’s Suffragettes (The History Press), Lady Katherine Knollys: The Unacknowledged Daughter of King Henry VIII (Chronos) and The Tudor Brandons (Chronos). She grew up in Richmond, Surrey and began soaking up history from an early age. Her love of writing has seen her articles published in various publications over the past twenty years.Sarah-Beth lives in County Wexford, Ireland, she works in publishing and has a BA in Social Policy