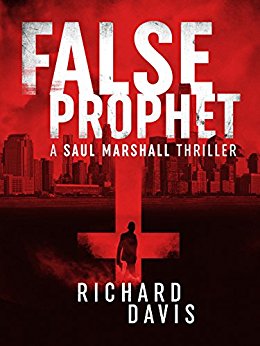 Do you love reading authors like Lee Child, David Baldacci or Michael Connolly? So this one is for you and it will leave your heart pounding!

A psychotic terrorist has his son. He will do anything to save him

Marshall is soon drawn into a cat and mouse chase with the leader of the cult, Ivan Drexler. As the scale of Drexler’s terrorist ambition becomes ever clearer, news arrives that he has taken Marshall’s son hostage. Removed from the line of duty, he must work alone, off-grid.

As the attacks intensify, Saul will stop at nothing to defeat Drexler.

But the FBI are questioning Saul’s own part in the carnage. He must work fast to save both his country and his life. Can Saul stop the carnage before it’s too late? And can he save his son?

As wave after wave of attacks break, the clock is ticking for Saul.

My Point of View:

This book is part of a series from Richard Davis, called Saul Marshall (our main character) – and this is the 1st book of the series –  and I seriously never heard of it. I love thrillers and this one got me hooked up for at least 4 days non stop (ok ok…mum here only read at night… still I couldn’t let go of the book for at least a couple of hours).

Excellently written, this author is now on my watch list for his next books!