Reuters Journalists of the Year Awards 2020 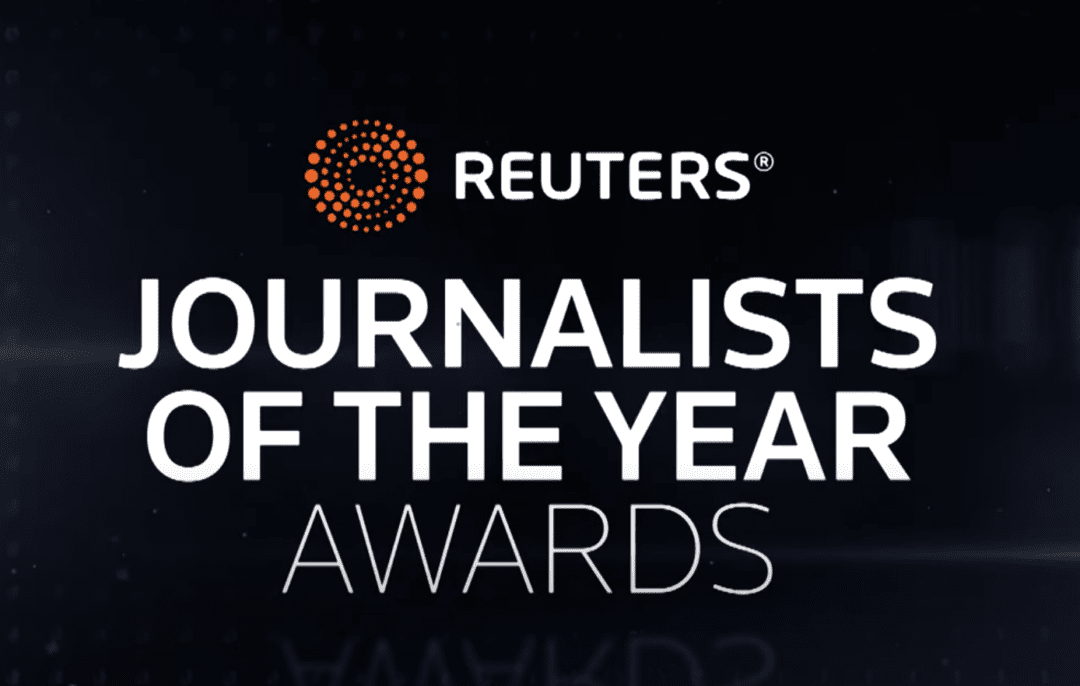 This 18th of March was the big Reuters Journalists of the Year 2020 Awards. Featuring interviews and insights into the stories behind the news. I was invited to join and celebrate the best of Reuters journalism from around the world and hear about the stories that shaped our lives in 2020.

The 2020 Journalists of the Year Awards were broadcast globally on Thursday, celebrating individuals and teams across 17 categories and included powerful reflections from a truly extraordinary year during which Reuters continued to report with accuracy, impartiality, and freedom from bias.

In a year in which Reuters journalists overcame enormous disruption in their own lives, judges honored the entire Reuters newsroom in the Story for the Year category, for coverage of the global pandemic. Reuters covered this once-in-a-lifetime story from every angle for every customer. No other news outlet in the world matched Reuters for the sheer breadth of coverage, detailing across all mediums every step of the pandemic and how it upended our lives in 2020, as well as the ongoing ramifications for governments, economies, markets, companies, and financial institutions around the world. 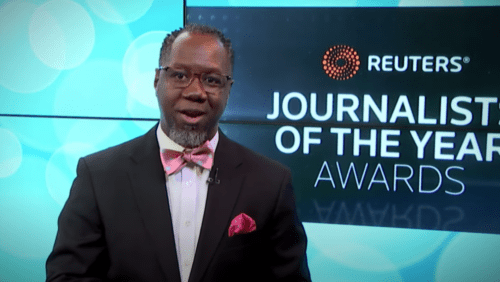 Coverage of the pandemic was also recognized in the Video Journalist of the Year category: Martin Quin Pollard won for his text and video reporting from the frontline of the start of the COVID-19 pandemic, bringing depth and breadth to Reuters coronavirus coverage at a time when little was known about the illness and the global impact that was to come. 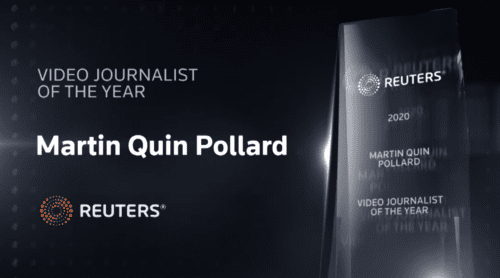 The Bangalore bureau was also named a co-winner for the Full Speed Award, for its tremendous win rate on major coronavirus-related news. 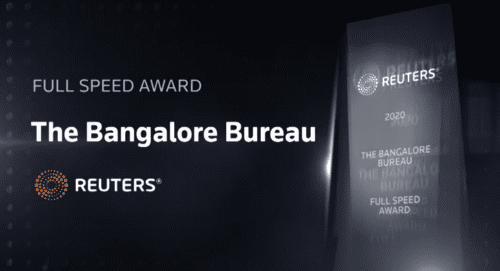 Elsewhere in coronavirus coverage, COVID-19 Global Tracker, which helped readers to understand the true size and human cost of “milestone” events in the pandemic, was named the winner in the Graphics category. 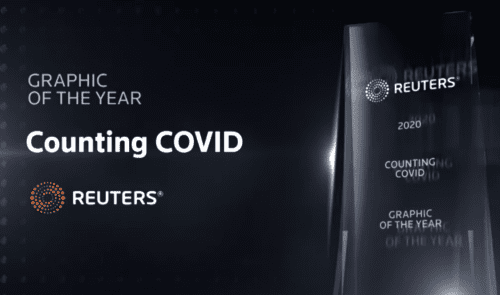 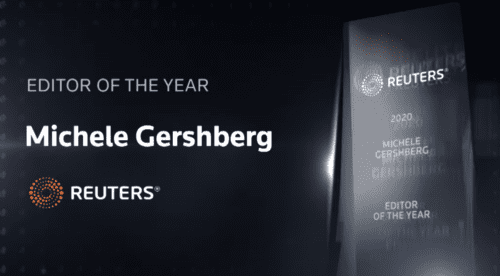 Also in the Editor of the Year category, Elections Editor Soyoung Kim won for running the most competitive file of the year with meticulous planning and collaboration across 2020 election coverage. 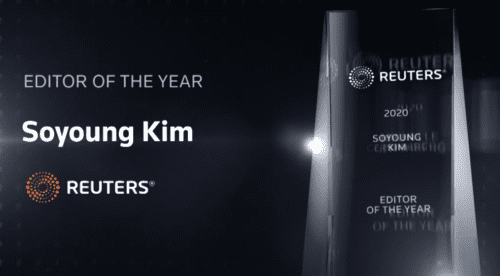 Kim’s colleague on the election team, Carlos Barria, won Photojournalist of the Year. Barria was honored for producing a year-long winning picture file on major stories such as the U.S. election, Black Lives Matter and the global pandemic, exemplifying the ability to produce pictures and video as well as comprehensive reporting from the field on all types of stories. 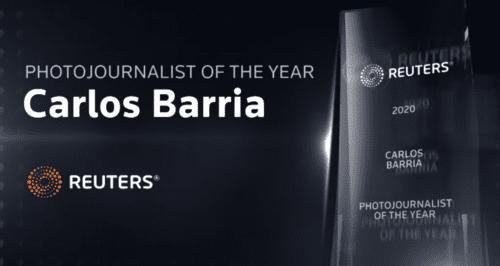 In the Photo of the Year category, Reuters honored the iconic image by Dylan Martinez of protester Patrick Hutchinson carries an injured counter-protester to safety in London. Hutchinson also joined Martinez for a discussion on how the moment came to pass, and how the image has changed his life. 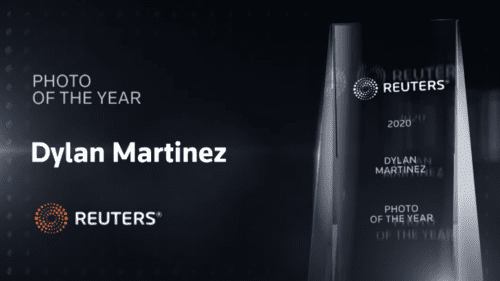 American Injustice, a series of special reports that examined the institutional failings of U.S. law enforcement and criminal and civil justice, was a co-winner in the Enterprise Reporting category. 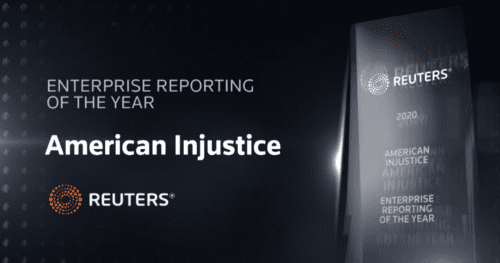 And in Best Use of Social Media, Discussing Race in America was honored for exceptional social media activity around race in America, including Twitter chats and Reddit AMAs, which engaged tens of millions of users. 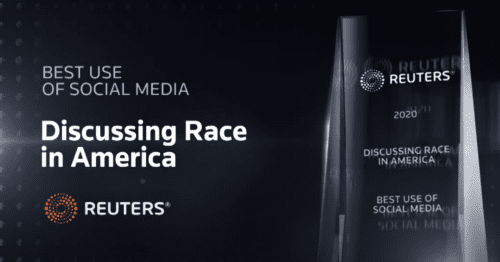 The Breaking News of the Year category recognized the team covering anti-government protests in Thailand for the insight and exclusive news on a movement that has demanded constitutional reform, political change and included calls for a reform of the monarchy. 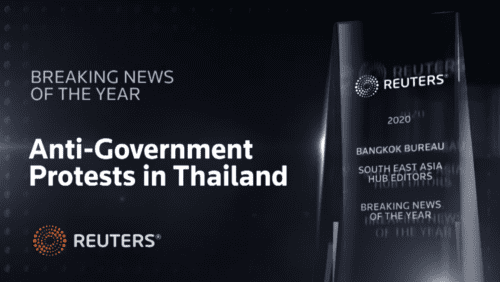 In the Baron Award category, which honors an individual who exemplifies the Reuters tradition of integrity and journalistic excellence–named after founder ‘Baron’ Paul Julius Reuter–Corinne Perkins won for keeping her focus on providing Reuters customers with a picture file from across North America that won praise for its quality, breadth, and speed. Judges said Perkins exemplified the qualities needed in a Reuters editor today – inclusive and analytical news judgement, self-confidence, persistence, customer focus, integrity, courage, and attention to all editorial assets, not just Pictures.

On the business front, Echo Wang won Reporter of the Year for her exclusive stories and comprehensive coverage of the breakdown in U.S.-China business ties, consistently keeping Reuters ahead of the competition on the biggest global business stories of 2020. 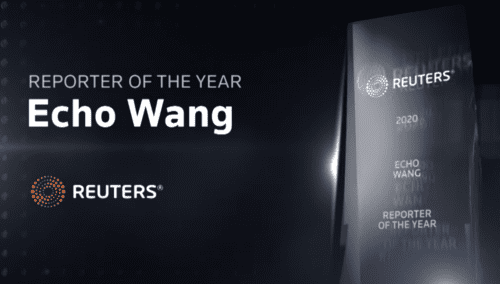 In Scoop of the Year, The Falwell Affair, by Aram Roston, won for reporting, in well-sourced and startling detail, the accusations of a sexual relationship with leading evangelical Jerry Falwell and his wife by a former business partner. The investigation led to Falwell stepping down as head of Liberty University. 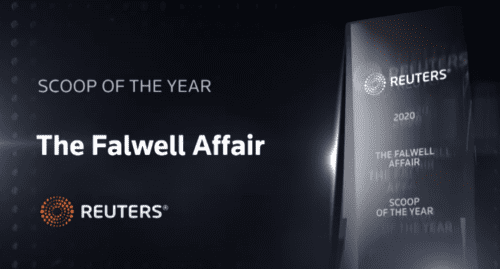 In the Desk Editor category, Pravin Char was recognized for injecting voice and a sense of fun into the business and financial file in 2020, turning stories about tax rules, debt and corporations into pleasurable reads with poetic headlines and pithy ledes. 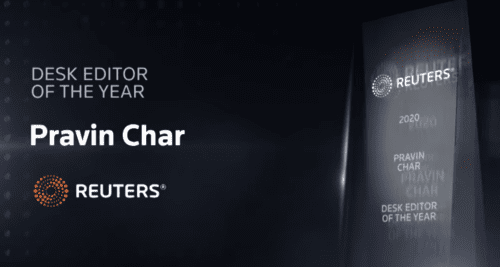 And European Central Bank Team was a co-winner of the Full Speed Award for its astounding win rate on the ECB, an achievement that came along with a string of exclusives and agenda-setting analysis.

Coverage of India’s shifting competitive landscape, by Aditya Kalra, won in the Business Beat category for consistently breaking news about how regulatory intervention has shaped the business outlook for companies including Amazon, Walmart, Reliance, Google and changed the game for industries from brewers to retailers.

Last but not least, in the Legal Reporting category, The Daily Docket newsletter, by Nate Raymond and Caitlin Tremblay, won for its lively mix of news, commentary, industry buzz and smart takes on the most important and interesting legal stories you may have missed. 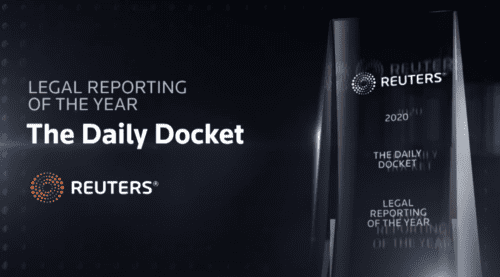 And Jenna Greene was honored in the Commentary and Analysis category for her range of legal commentary, from the inside story of a law firm working pro bono to help U.S. mayors come up with a detailed plan on reforming policing to a musing on the holiday lawyer movies Hollywood should really make.

A lovely Award featuring one of the hardest years we have experienced with so much in it: from Politics to Freedom. Here are some of my favorite photos: 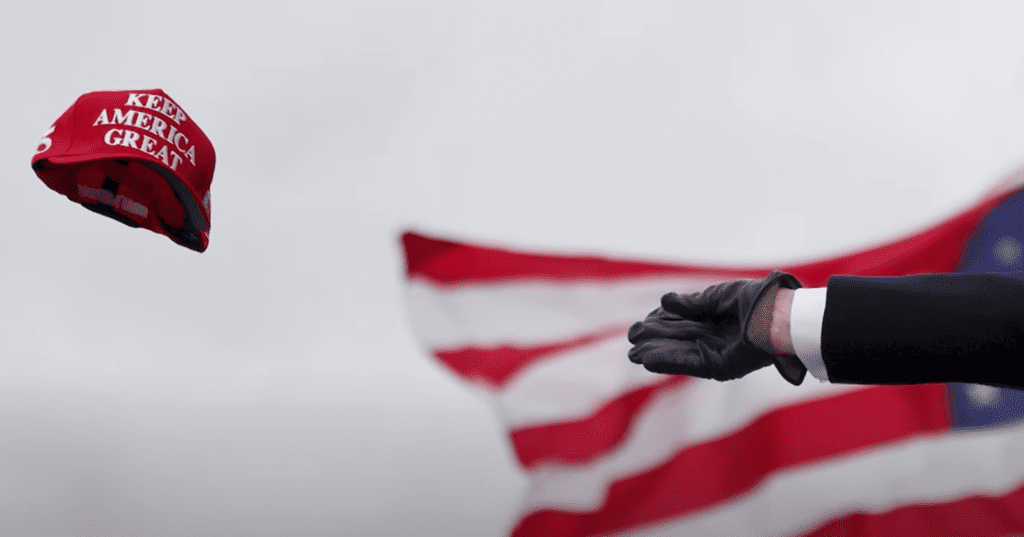 Image by Dylan Martinez for Reuters

New dress from @femmeluxefinery and still no mirro

Whatever you want to say, this oil is life! I use

It’s Monday Peeps!! And one of my favourite Hero

To read in your language press Translate down the

Finally I can say this: Alejandra’s Life has won

I tried several earbuds with no success. Firstly b

My @roccaboxuk of May had: @illamasqua powder high 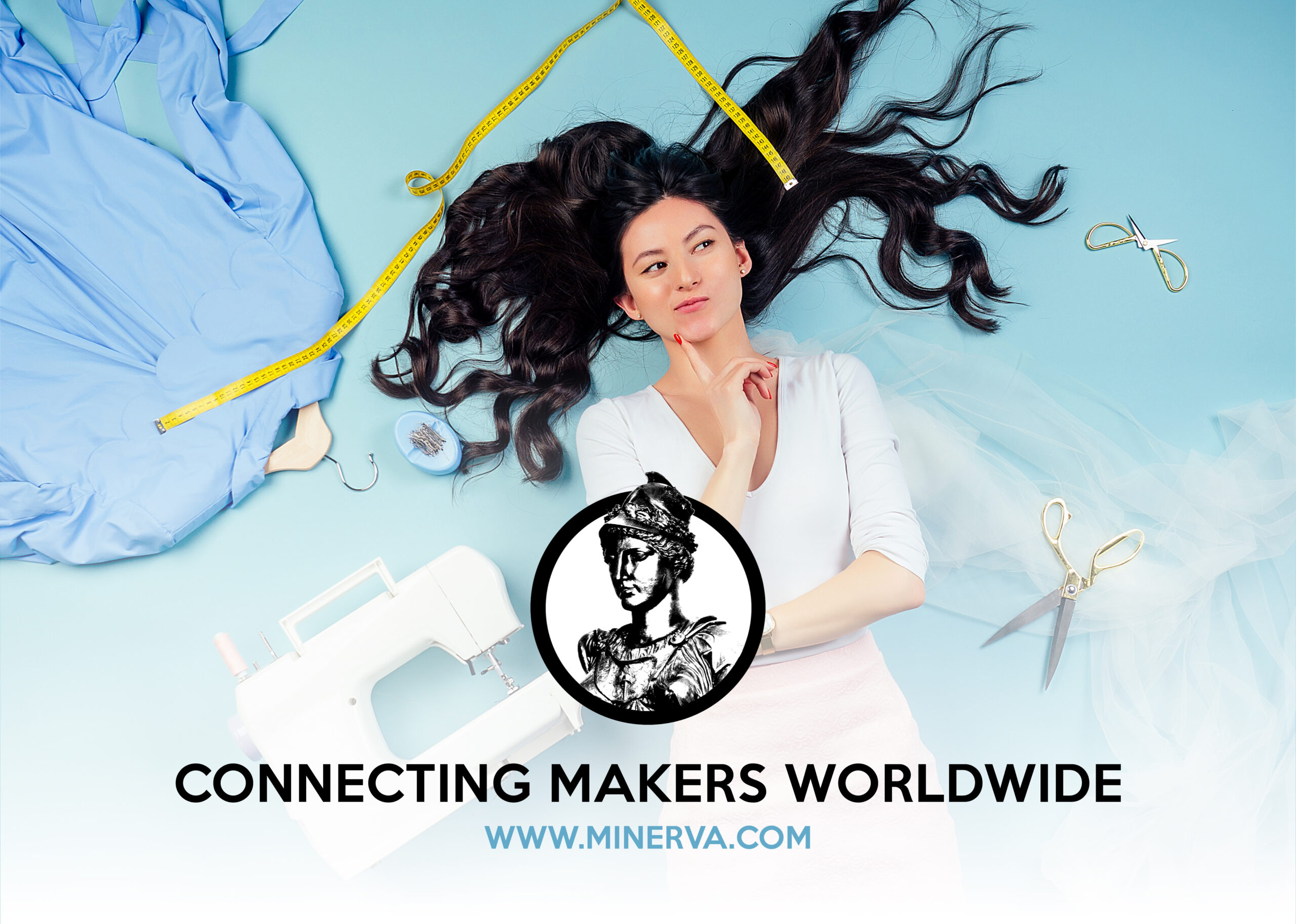