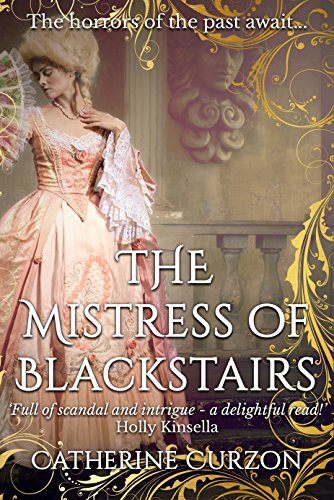 The Mistress of Blackstairs by Catherine Curzon

Everyone thought she was dead…
In 18th century Covent Garden, Madam Moineau, is the mistress of Blackstairs, an establishment catering to the finest clients in London.
The mysterious, veiled lady of Paris was better known in the past as a former courtesan and went by the considerably less exotic moniker of Georgina Radcliffe, or Georgie to her friends.
In the winter of 1785 two men appear in Madam Moineau’s life.
Rogue artist Anthony Lake has recently returned from Europe. Lake is on his own assignment, searching the streets of London for the daughter he only recently discovered he had fathered.
He learns that the child’s mother is dead, brutally killed and Anthony finds himself on an unexpected mission to avenge his ex-lovers’ murder.
Nearly ten years after he left Madam Moineau, then known as Georgina, for dead, Viscount Edmund Polmear returns to London.
He has a new fiancé in tow and is soon to be found around Blackstairs, seeking a further mistress for his own pleasure.
His sudden appearance is a shock for the victim that he believed he left for dead, forcing Madam Moineau to face the horrors of her own past head on.
Anthony Lake and Madam Moineau’s lives become inevitably and inextricably entwined as they find themselves up against the fearsome and unforgiving Viscount Polmear.

Oh my goodness! This book is really good! I love Historical fiction and this one surprised me in such a way. It is NOT one of those cheesy romances (I hate romances) it is captivating and full of twists!

About the Author:
Catherine Curzon is an 18th century historian and author. Her work has been featured online by BBC History Extra and in magazines including All About History, Explore History, History of Royals and Jane Austen’s Regency World. Catherine holds a Master’s degree in Film and when not dodging the furies of the guillotine, writes fiction set deep in the underbelly of Georgian London. She lives in Yorkshire atop a ludicrously steep hill.