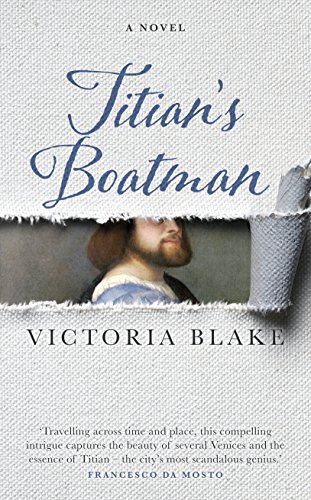 Historic Thriller with so many details that makes you feel, see and smell Venice from the old days.

It is 1576 and Venice is in chaos, ravaged by plague and overrun by crime.

In the midst of the anarchy we find those brave souls who have chosen not to flee the city. Titian, most celebrated of Venetian painters, his health failing badly. Sebastiano, a gondolier who is the eyes and ears of the corrupted and crumbling city. And Tullia, the most notorious courtesan of the age, who must fight to retain her status as well as her worldly possessions.

In the present day, the echoes of what happened centuries earlier still ripple as the lives of ordinary people as far distant as London and New York are touched by the legacy of old Venice…

Victoria Blake’s love of Italy and history was inspired by her father, the historian Robert Blake, famous for his pioneering biography of Benjamin Disraeli.
She grew up in Queen’s College, Oxford where he was the Provost. After studying history at Lady Margaret Hall she subsequently worked in law, publishing and bookselling.
She is the author of an Oxford based crime series featuring the PI Sam Falconer and has written two true crime books for the National Archives, one on Ruth Ellis, and one on Florence Maybrick. Her historical novel Far Away has been short-listed for the Historical Society Novel Indie Award 2016.