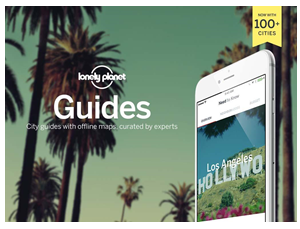 To mark its one year milestone, Lonely Planet’s flagship app, Guides, recently introduced its 100th city. The free travel app has had almost one million downloads since it launched last year.

Initially released with 37 cities on January 28 2016, Guides by Lonely Planet is a simple, easy-to-use tool that gets travellers to the heart of a destination.

Both inspirational and informative, Guides includes offline maps, “near-me” functionality, simple bookmarking and powerful filtering tools making it perfect for planning a trip and on-the-ground exploring. In a Medium post, head of Lonely Planet’s mobile product and design, Diego Jiménez, said, “We built the travel tool we, as fellow travellers, would like to use.”

Over the past year, the app has evolved in response to consumer needs to create an even better user

experience. New features include neighbourhood and transport sections, faster maps and phrasebooks in 19 languages. Users can now vote on cities they would like available in the app next.

Jiménez said, “We opened new communication channels to make it easy for [users] to express their needs and share feedback. We also wanted to give our community the power to decide which cities are added to the app every month.”

Guides was an Editor’s Choice on Apple’s App Store, and has been seen in The Washington Post, The Los Angeles Times, The Guardian, Forbes,  Mashable, Lifehacker and The Next Web.

Available on App Store and Google Play for iOS and Android