Movie afternoon with me and RJ!
This time we have seen: Space Dogs Adventure To The Moon

Space Dogs (a.k.a. Belka & Strelka — Star Dogs, original: Белка и Стрелка. Звёздные собаки, Belka i Strelka. Zvyozdnye sobaki) is a 2010 Russian computer-animated film. The film is based on the Soviet space dogs and honors the first animals who survived an orbital space trip.
Space Dogs: Adventure to the Moon (released on the 16th of May of 2016) is the third installment in the Space Dogs brand, which includes Space Dogs 3D & TV series Space Dogs Family! 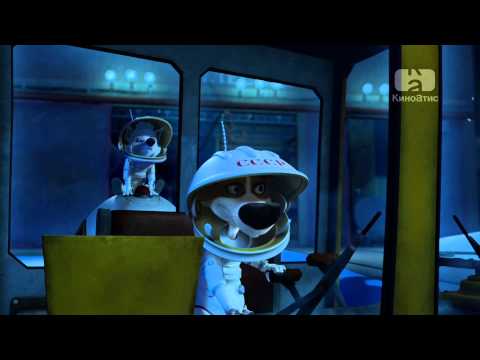 Get ready to blast off to an out-of-this-world adventure with canine teenage astronaut, Pushok, who is determined to find his missing astronaut father.
Against all odds, Pushok stows away on a US rocket ship to the moon but soon finds he is not alone, as he is reunited with his mom and encounters a macho monkey and a baby alien.
Together, the furry heroes learn the true meaning of teamwork as they join the search for Pushok’s dad.

This movie was a different one since it was the first time I have seen an animated russian movie (even though is in english) and it was pretty amazing the quality of the animated sequences and the plot.
I think is a more 6+ year old movie, it can be seen by the little ones but they won’t understand some parts of the dialogues or gags.
Still I recommend it since it’s really a good movie… And now I have to see the other 2 previous movies.  🙂
DIRECTED BY: Alexander Khramtsov, Inna Evlannikova, Mike Disa, Vadim Sotskov
GENRE(S): Family, Animation
PRODUCER(S): Patrick Ewald, Sergey Zernov, Shaked Berenson, Vadim Sotskov, Yuliya Matyash
Duration: 1h 30m
[youtube=https://www.youtube.com/watch?v=j35Ol73n3Bk&w=320&h=266]
Have you seen it?
Cheerio #SpaceDogs  #БелкаиСтрелка