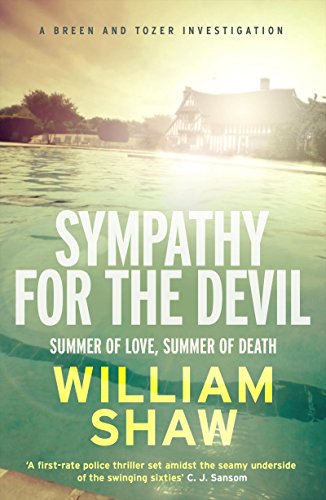 Sympathy for the Devil by William Shaw

In the fourth Breen & Tozer, William Shaw marries a gripping police procedural with an espionage plot to bring the series to a stunning and moving climax.

She made a profit from her youth. She’s not beautiful anymore – but she will be young forever.

Called away from his pregnant girlfriend, Detective Sergeant Cathal Breen knows the sight of the murdered prostitute will be with him all his life. But this is what he does: he finds killers. Helen Tozer, more than most, understands why.

The girl they called Julie Teenager had a client list full of suspects – all rich, powerful – and protected. Someone warns off the beat coppers; someone disturbs the crime scene. Breen begins to fear that this is more than the murder of a prostitute. It’s political.

Then Helen, with her ex-copper’s instincts and fierce moral sense, gets dangerously involved. And Breen knows he has more to lose than ever before. He is about to become a father. He can have no sympathy for the devil.

Breen and Tozer met through murder. They work in a world before forensics or criminal databases; a world that’s bigoted and brutal. Tense, dramatic and ingeniously plotted, Sympathy for the Devil is a gripping police thriller that delivers crime with a conscience.

This was thrilling for the beginning to the end. This is the 4th Book for the series, and Breen and Tozer are back. Fast paced action, reminded me a bit of brad Pitt in 7, because of Breen and his pregnant girlfriend, and finally someone got an ex-cop woman instead of always being a man. A big praise to William Shaw on his writing, was gripping and makes you think about what’s wrong in the world.

Get Sympathy for the Devil by William Shaw